This article is about the pilot. Did you mean the television series or the vehicle and setting?

The pilot episode of Infinity Train was released on November 2, 2016, via Cartoon Network's YouTube channel, and later aired on Cartoon Network at 6 a.m. on February 11, 2017.

Tulip must learn to set her personal interests aside to make her way through a mysterious train and help the king of all corgis save his people.

The episode begins with the Infinity Train traversing on railroads through some sort of barren wasteland. The camera then begins to pan towards Tulip in the Puzzle Car, passing by the Bubble Car and the Chess Car.

Inside the Puzzle Car, an annoyed Tulip asks why the number 53 was still on her hand after a week of being stuck inside an unknown train. One-One, atop a balancing scale, asks her what it meant, but the question was deflected back to it when Tulip said that it had lived its whole life inside the train and she has only been here for a short amount of time. Sad-One then retorts that her questions may never be answered. Even as Tulip becomes increasingly agitated by the number on her palm, she instructs One-One that the switch to open the door is a balance and that it had to be on both sides. One-One then separates to balance the scale, causing a platform to appear which causes a chain reaction from a contraption to unlock the door leading to the next train car. As Tulip picks up a now together One-One, it begins to pessimistically assume that the next car is going to be a "Fart Car" stating that it would be apt for its misery, to which the other personality happily agrees with the other. Tulip then reprimands Sad-One for being very pessimistic, even after 8 cars and that it was too unlikely. Tulip is then proven wrong when she opens the door to the next car which ends up being a Fart Car.

As Tulip opens the door with her eyes closed hoping that it was a way home, she is greeted by the beautiful scenery of a sunbathed riverside vista filled with corgis, complete with buildings akin to Greek architectural structures complete with columns and entablatures. Glad-One asks if this was Tulip's house, she answers with a no. A horn is then blown by a corgi atop a pile of rocks, signaling the arrival of their king. The king sits on top of a litter carried by four different corgis. As he approaches Tulip and One-One, the king introduces himself as Atticus, King and uniter of the Cardigans and Pembrokes. After their introductions, Atticus gives the trio a tour of his kingdom. Tulip then praises Atticus for their advancement in their society.

Tulip then shoots down Atticus' offer of a place to relax and tells him that she is just looking for the door so she can leave and eventually go home. Atticus reveals that the next door is locked but before he can tell her what he knows, a messenger corgi warns Atticus that the river is flooding again. Atticus then issues a command to go inside the temple stating that the monster has returned. But before Tulip can ask about the monster, a giant shadow looms over the sky, to which Glad-One assumes is a shadow puppet. Picking up One-One, Tulip then runs toward the temple wherein the other dogs are also seeking refuge. As Tulip asks questions about the monster, Atticus answers her that he himself does not know. Glad-One then volunteers to go outside to check if the monster is still there and proceeds to separate from Sad-One and leave, even after Tulip's protest. Sad-One then volunteers to write Glad-One's obituary, to which Atticus comments on Sad-One's morbidity. Glad-One then pops into the room shouting, only to say that the monster is gone. Atticus says that they should go outside. Tulip, groaning from Glad-One's excitement and earlier unneeded outburst, begins to exit, only to go back inside due to Atticus not leaving the temple. After a scene where Tulip coaxes a skittish Atticus to go outside is finished, Atticus then reveals that the monster has been returning to their kingdom for about a week, the same time Tulip has been on the train. Atticus then enlists Tulip's aid in conquering the monster as there may be some correlation with the numbers and the monster. Tulip disagrees at first due to the nature of the two events being unlikely to be related and as she is wading through the river, Sad-One reminds Tulip of the unlikeliness of the Fart Car, to which Tulip groans.

Tulip returns to Atticus' side and tells him that she will help. An antsy Atticus is carried to the other side of the river by a struggling Tulip, and then they then begin to traverse through a grassy field and climb a rocky mountain. Reaching the top, Tulip and the rest see the door, but as they approach it, they see the monster's intimidating shadow. The gang hide behind a boulder for cover, only to see that the monster was just the shadow of a spider on a work light. Tulip then approaches the light and picks up the spider as it dangles from its web, only to be eaten by Atticus stating that the monster has been destroyed, to the disgust of Tulip and One-One.

Tulip then looks at her palm, hopeful that it would change, only to angrily find that it didn't and begins to rant to herself about her misfortune. Feeling defeated, Tulip slouches into a sitting position against a boulder. Atticus then sits beside Tulip comforting her, telling her that she just needs to wait for a "push" to get her back on her feet again. He also expresses that it were not for Tulip, Atticus would've given up. Atticus saying that Tulip was his "push." Tulip then thanks Atticus for his encouragement and begins to give him a belly rub. As Tulip continues to rub, she begins to logically infer that if the spider was the one that caused the shadow. As she peers into a giant hole in the sky, she wonders what had caused the water to rise and why was there a work light. Tulip then looks to her side, seeing a light shining in the distance.

Inside a bush, Tulip, One-One, and Atticus see the "beast" working on a contraption, as water is flowing out from a large broken pipe overhead. Tulip infers that the beast broke the pipe, while Atticus that they attack to which Sad-One replies that they'll never make it. Tulip then asks Atticus questions on how to open the door, only to be given instructions on how to open any door. Glad-One then naively volunteers to talk to it, and upon doing so, the gang is assaulted by a barrage of bullets being shot out of the beast's eyes. As they hide behind another boulder, Atticus begins his charge towards the beast, dodging a hail of bullets only to be effortlessly flung towards a wall by the beast. Tulip, seeing Atticus hurt, shouts his name which reveals her location to the beast as she proceeds to runs towards the door.

The beast approaches Tulip and trips her, then demands her that she return to her seat. Atticus, recovering from his flight, pushes a lever that stops the water in the broken pipe from flowing. This serves as a perfect distraction as the beast diverts its attention from Tulip, giving her enough time to slam the door on the beast's face. Its face is revealed to be a mask and reveals the inner workings behind the mask, composed of gears, wires, and a flamethrower that is spouting neon blue flames. The beast is stunned, giving Tulip an opportunity to pick up her bag and she begins to make a break for it, only to be tripped again as the beast reattached its mask and coils one of its cables around Tulip's ankles. Her bag then opens revealing One-One and asks if he should start writing her obituary.

Upon seeing One-One, the beast then uncoils its cables on Tulip's leg and leaves the cart through the hole in the sky. Atticus returns to One-One's side. Tulip, still slightly dazed, is asked by One-One what is wrong. In response, she says that she got her "push" as the number on her palm changes from 53 to 49, looking through the hole in the car's sky. 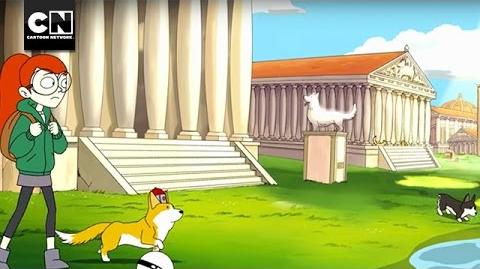